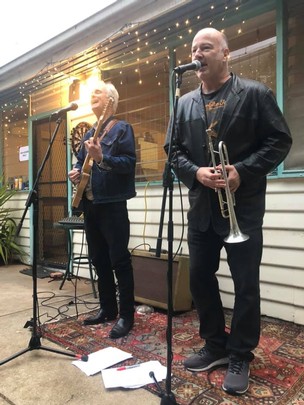 In Stock
Be the first to review this item »
Tweet
Email

Available for purchase on the night:

CIDER BY THE SIDE PROJECT

Jack Howard and Nicky Del Rey having been making music together for over 25 years now. They first got to know each other during the fertile and fabulous Melbourne music scene of the early 80s. Nick was playing in the splendid King Jerklews with artist John Campbell and Jack was beginning his rock’n’roll journey with Hunters & Collectors. They spent a decade as good buddies but they were passing ships in the rock’n’roll night as the Hunnas moved beyond the local scene and became one of Australia’s iconic bands, touring relentlessly nationally and overseas. Nick, in the meanwhile, was plying his trade as everybody’s first choice country guitarist around Melbourne. From Intoxica to Lisa Miller’s Truckasaurus to The Moonee Valley Drifters, Nick was the debonaire and brilliant right hand man to many a lead singer.

When Jack finally bit the bullet and started recording his own music in 1994, he turned to Nick and they’ve stuck fast ever since. Under the guise of Jack Howard & The Long Lost Brothers, their duo Nickeljack and as part of Jack’s great Australian music project Epic Brass, Jack and Nick have forged a dynamic and prolific musical partnership. Jack has also played on many of Nick’s projects like the Slowtown Social Club and Surf’n’Turf. Jack has just produced the demos for Nick’s next record.

In 2017, Jack toured the world with Midnight Oil; and in 2020, Jack released his memoirs, Small Moments Of Glory and his tenth studio album, Dog Songs. Once again riffmeister Nicky Del Rey was there as his foil, letting rip on guitar and singing sweet harmonies.